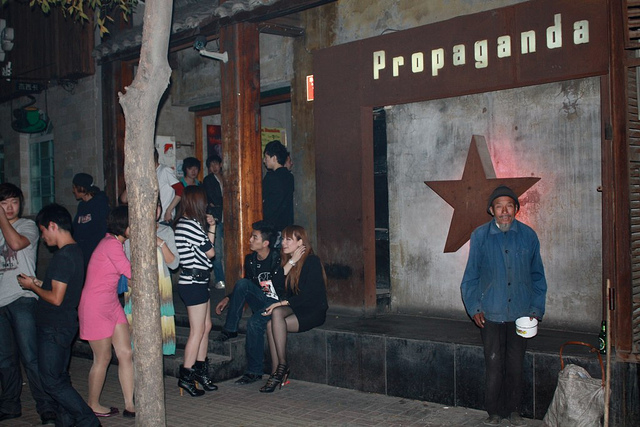 Old Zhao in front of Propaganda nightclub in Wudaokou, Beijing

“Old Zhao” is an elderly bearded beggar who spends his evenings working the streets of Wudaokou (五道口), in Beijing’s university district. After several years of plying his trade, Old Zhao, with the clinking of coins in his porcelain begging bowl, has become one of the most recognizable figures in the neighborhood. His story is a familiar one for tens of millions of working class Chinese people, even if his current choice of work is not.

For someone who has endured a lifetime of hardship and limited opportunities, he appears remarkably content with his current existence. We spoke with Old Zhao recently and found out what draws him to the indigent lifestyle.

How old are you? Where did you grow up?

I’m seventy years old. I was born in the village of Minquan, in Henan province.

Could you tell us about your early life?

I was a single child and grew up on a farm in Minquan. My mother was a cook and I learned how to cook from an early age. I picked crops on my family’s farm and also served as the village cook for the Production Team (Production Team was the basic accounting and farm production unit in the People’s Commune system that lasted from 1958 to 1984).

I got married at age twenty-four and had a son a couple years later. Now I have two grandchildren. We all lived and worked on the family farm, until three years ago, when I left. The farm has wheat, corn, and other crops. We have a self-constructed three-room house. We also have a backyard, with chickens, dogs, and pigs.

What do you think of Mao Zedong (Chairman Mao)?

He was the leader of the Revolution and the current leader of China is following in his example. I have nothing else to say.

Was life on your farm and in your community affected by the Cultural Revolution?

Did you attend school?

I attended one year of elementary school, but then dropped out to work on the farm. I can’t read and write. The only Chinese characters I understand are those for my name.

When did you first come to Beijing? Why did you decide to become a beggar?

Several years ago, the male labor force in my village decided to move en masse to bigger towns and cities, in search of better jobs and pay. They moved all over the country. About 85% of the village’s labor force left. The men went to the cities as laborers while the women went to work in factories.

I decided to pursue the trend, though I was too old and frail to continue doing manual labor. I decided to go to Beijing and become a beggar. That was three years ago. I feel this is the only job I can do at this point in my life.

What about your family?

They stayed behind to tend to the farm.

Can you describe a typical day in your life? Where do you “live”?

I sleep on the ground under the bridge at the Wudaokou subway station. I wake up at 5 or 6 a.m. and then begin wandering throughout the northwest part of the city. I make it back to Wudaokou in the late evening. I usually go to sleep by midnight.

How much money do you usually make per day? 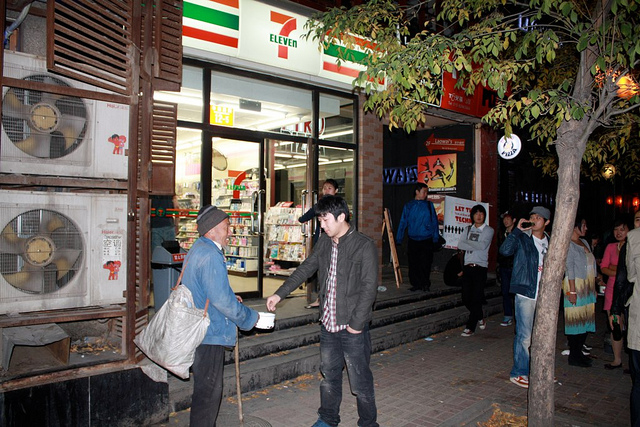 How much money did you make per month before you began begging in Beijing?

Who is most generous to you?

Foreign women tend to be most generous. One time, I even received 100 RMB from a foreign lady. Chinese people usually give less. 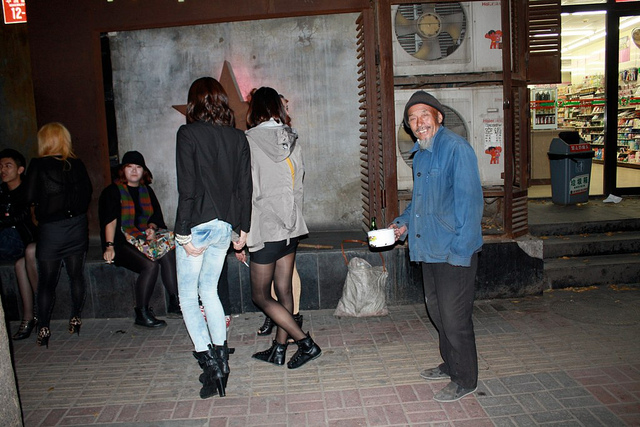 What do you do with your money?

I spend very little—no more than 5 to 10 RMB per day on meals. I usually eat porridge and mantou (steamed buns) and save the rest of my money. One time, I bought a pair of shoes here for 7 RMB ($1.05).

How do you get home to your village each month?

I sneak onto a train and sleep between the railway cars. It’s a twelve-hour train ride.

Have you ever been caught?

Yes, I’ve been caught several times, but the train staff took pity on me. Only once have I been required to pay for a ticket after being caught.

What do you do during your time off each month?

I relax at home with my family and watch the CCTV news broadcasting every day (CCTV is Chinese Central Television, the primary state-operated television network). Our home has three rooms, so there are two people to each room. I live there with my wife, my son and daughter-in-law, as well as our two grandchildren.

What sort of possessions do you have with you during your time in Beijing each month? Do you have a change of clothes?

I wear the same clothes during my time in Beijing and I don’t have access to showers while I’m here. I have my walking stick, a drinking bottle, my begging bowl (which also serves as a washbasin), a cushion, and some food.

Have you ever run into any trouble with the police?

There is a government department (Beijing Municipal Assistance Center) that is responsible for homeless people here in Beijing. One time, I was picked up by them and brought to their detention center. It is like a prison for the homeless. They have the power to detain you and send you back to where you came from.

I spent twelve days at this detention center, where I was fed and provided with good accommodation. The building holds about 500 people and each room has a dozen beds. The beds are quite comfortable. We were served mantou (steamed buns), rice and vegetables. Meat is only provided during official government holidays. As far as recreational facilities go, there is a poker table there. I played poker with some other detainees while I was there, to pass the time. At the end of my detention period, I was given a warning. Repeat offenders are required to serve double sentences. I haven’t been caught since.

Do you have any friends in Beijing?

I occasionally play poker under the Wudaokou bridge with some other beggars. The most I’ve won or lost is 10 RMB. I know another local beggar that is from my home province and is the same age as me. I’ve known him for a year.

I used to know a student from Japan who was studying at Beijing Language and Culture University. He befriended me and was quite generous. We talked occasionally before he returned to his country.

Do you have any special skills that you could use to earn a better living?

My only skill is cooking. I don’t have enough start-up capital to open a restaurant, so that’s not an option.

Do you ever dream at night? Can you remember your dreams?

Sometimes. My best dream involves a gust of wind which is carrying tons of money toward me. There is so much money, I can’t carry it all.

If you could visit anywhere in the world, where would you go?

I would go to America. America is a good place. It is a very strong country with very advanced weapons. Americans are smart and they have advanced technology.

Do you have any plans for the future?

I will work here in Beijing for two or three more years, before I return home for good and retire. I have some lung problems, so I don’t think I can continue this life for much longer. 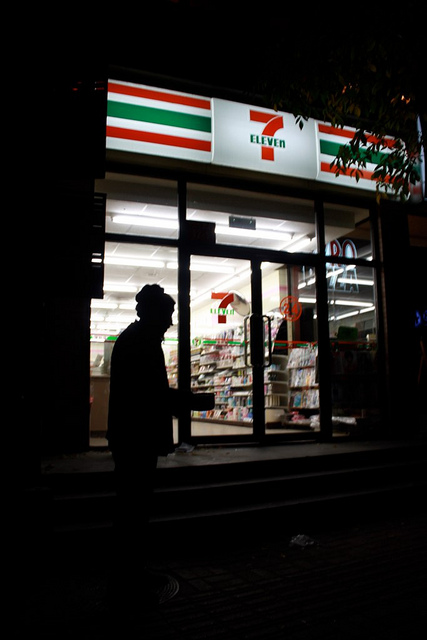 4 thoughts on “Down and Out in Beijing: The Story of a Migrant Beggar”