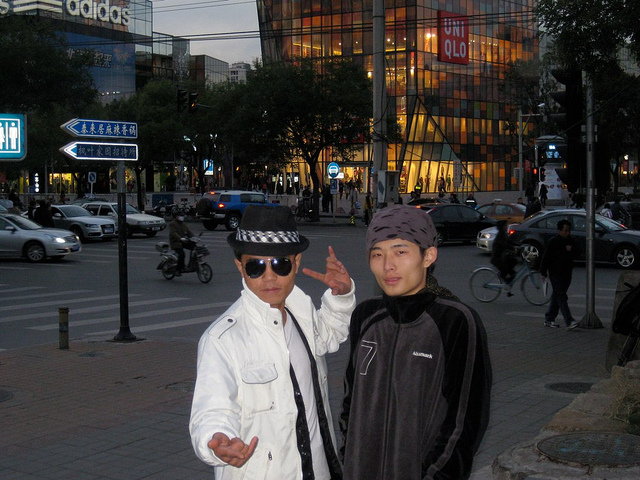 Liu Hong Wei and Lang Xin Long are two young, aspiring dancers who have moved to Beijing with dreams of stardom. On weekend evenings, they can be often be spotted dancing at a busy intersection in the heart of the city’s entertainment district. You can see videos of them performing here:

Lang Xin Long practices Michael Jackson-style moves, while Liu Hong Wei prefers Korean-style breakdancing. They are best friends, their relationship forged out of unity of purpose and plight. Their struggles are many and their goal is singular. Their stories are as follows:

Can you tell me about your early life? Where did you grow up?

I grew up on a wheat farm in Gansu (a remote province in northwest China). As a child, I helped out on the farm.

What schooling did you receive?

I attended primary school and junior high school. I dropped out when I was fourteen.

What happened after that point?

I ran away from home from home at age fourteen, due to suffering beatings at the hands of my father. I wanted to get as far away from home as possible, so I snuck onto a train bound for Urumqi in Xinjiang (the westernmost province in China). I haven’t been back since.

What did you have with you when you ran away?

What did you do when you arrived? What was your life like there?

I found a job as a dishwasher/cleaner. I was able to support myself and later learned how to cook. I saved some money and rented a small restaurant, though it eventually went bankrupt. My girlfriend also left me during that time. I then roamed throughout southern China, looking for work.

When did you begin dancing?

I happened to see a TV program about Michael Jackson that aired on the day of his death (June 25, 2009). I had never heard of him before. I felt inspired by his life and identified with him, since he also had been beaten as a child. Learning about him helped me regain my hope for life and I then decided to start studying dance. I began practicing ten hours a day for the next six months. I felt very driven. 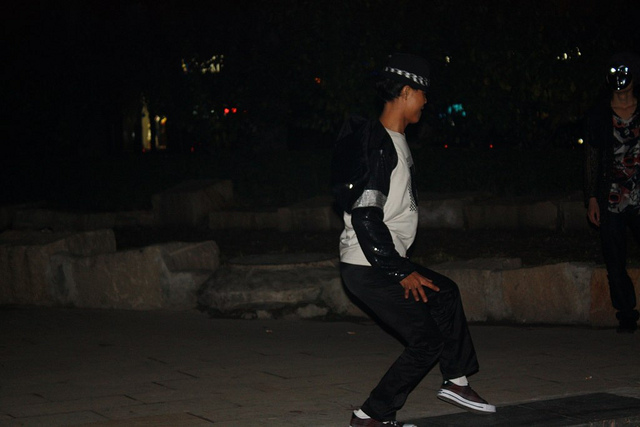 Did you know anyone in Beijing before moving here?

When did you move to Beijing? Have you found a day job since you arrived?

In the summer of 2009. I first found work as an extra at Beijing Film Academy, then did construction work and I now work as a watchman for an apartment building.

How much do you make as a watchman? What’s your work schedule?

Where do you live?

My employer provides a dormitory for employees.

What do you do when you’re not working?

I practice my dance moves for three to four hours a day. I don’t feel like I have enough time in the day to get everything done.

Have you found any dancing gigs since your arrival in Beijing?

Someone videotaped a performance of mine last October and it was shown on Baidu (the top search engine in China). I was offered a job at a bar in Shanxi province as a result. The job only lasted fifteen days, as the bar broke their contract with me. I haven’t found any other dancing gigs since.

What will you not dance to?

I will dance to anything, under any circumstances.

Do you have any groupies?

Yes. Two months ago, I was dancing and was aggressively approached by a girl who asked for my number. The relationship moved pretty fast. We began dating and hung out together on a continuous basis for the next fifteen days. She left me due to pressure from her parents. I’ve been approached by other girls since, but have declined them. I’m still upset about losing her.

When you meet a girl, do you wonder if she is a good dancer?

Have you ever met a professional dancer?

I’d like to quit my day job and start my own dancing crew. I would choreograph the moves for my crew.

I met someone who works for a charity who might be able to arrange an opportunity for me to perform at the CCTV New Year’s Gala in January (the premier television event of the year in Mainland China).

What do you dream of?

Performing on a stage in front of a huge audience.

If you could dance anywhere, where it would it be?

In front of a statue of Michael Jackson, in America.

What would you say to Michael Jackson, if you had the opportunity to meet him? 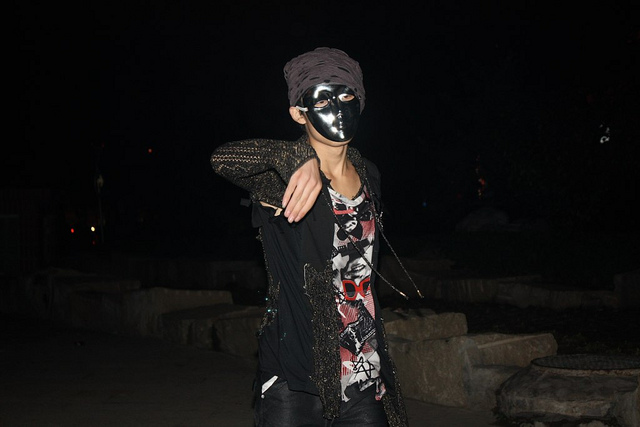 Can you tell me about your early life? Where did you grow up?

I grew up in Jilin City, an industrial town in the northeast part of China. My father is a factory worker and my mother is a dress design teacher at a fashion school. I started dreaming about becoming a star when I was six. I moved to Zhejiang province with my mother when my parents divorced.

What schooling did you receive?

I attended primary school and junior high school. I dropped out when I was fifteen. I learned about dress design from my mother and began singing when I was seventeen.

When did you decide to pursue your dream?

When I was sixteen, I decided that learning how to dance would be the best way to become a star. I began training with a dance coach. He wasn’t actually that good; he just taught me the basics. I learned the more difficult moves by watching Korean and American dance videos online and copying the moves. From that point forward, I spent nearly all my free time practicing. That was all I did, other than eating or sleeping.

Can you tell me about your recent history? When did you move to Beijing?

When I was eighteen, I moved away from home and found a job as a waiter. I would practice my moves whenever I wasn’t working. I decided to move to Beijing three-and-a-half months ago, since there are more opportunities to become famous here. My plan was to take part in “Avenue of Fame,” a popular Chinese reality TV talent show.

Did you know anyone in Beijing before moving here?

What did you come to Beijing with?

A small bag with some clothes. I wanted to start anew.

How has your life been since you moved here?

I feel lonely. I met Lang Xin Long (the other dancer featured in this article) shortly after I arrived here. He is my only friend at the moment. I’ve tried to find dancing gigs on the internet, but haven’t been able to find anything stable.

How are you supporting yourself now? Where do you live?

I have some savings from my time working in Zhejiang province. I have no stable home now. I spend my nights sleeping on a couch in an internet café. It is 18 RMB ($2.69) a night. 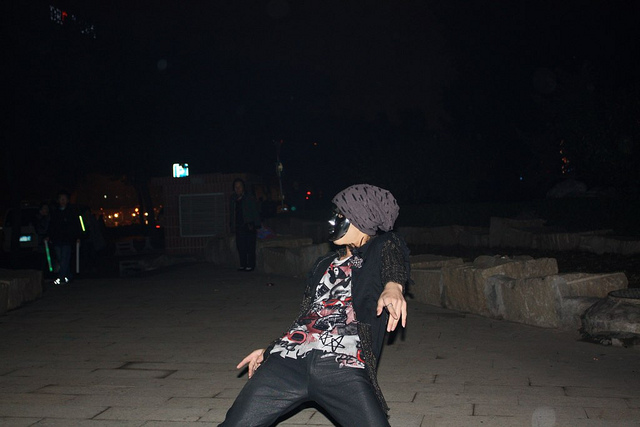 Have you made any important contacts since your arrival in Beijing?

A few days after I arrived in Beijing, I was approached by producer, while I was dancing in Sanlitun (the entertainment district of Beijing). This producer observed that I was dressed fashionably and asked me about my plans. I told him about my intention to perform on “Avenue of Fame” and he told me that I needed to professionally tape my dance performance in a studio and then send it to the TV show producers. This would cost 10,000 RMB ($1,500). This is far too much for me.

Have you ever met a professional dancer?

Where do you practice?

Is there anything you will not dance to?

When you meet a girl, do you immediately wonder if she’s a good dancer?

I will apply to a couple dance reality TV shows—ones that don’t require such a large financial investment.

Where do you see yourself in five years?

As a star in Beijing. A famous singer/dancer.

After I am famous, I would like to do a performance in my home town. That way, my hometown can also become well known. 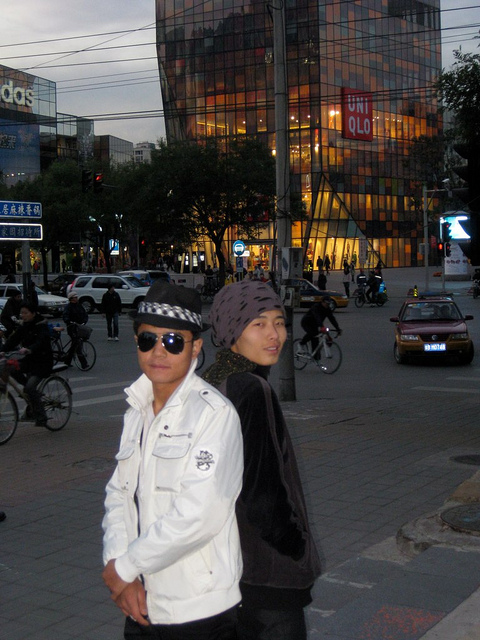