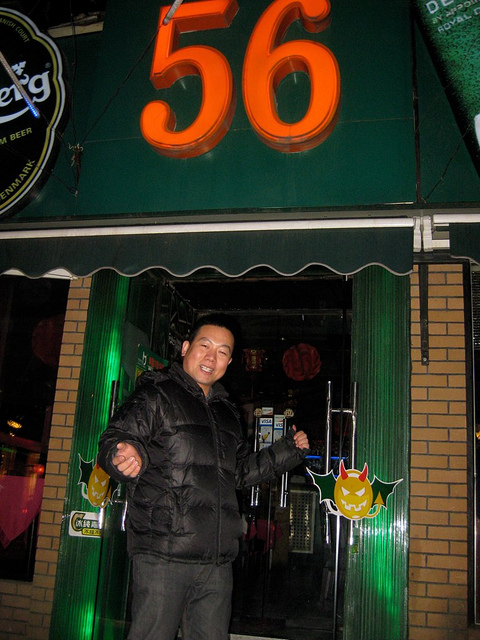 Someone who publicly solicits customers in a bold way.

The calls grow louder and more intrusive as you progress down Beijing’s Sanlitun Bar Street, a cornucopia of gaudy facades, neon lights and larger than life beer advertisements. This stretch of Sanlitun is home to a number of bars that depend on touts to feed their thirst for customers, most of whom are tourists. The touts work the sidewalk like carnival barkers, each having only a few seconds to pull passing customers inside before they pass onto the next bar’s turf.

John is a longtime Beijing bar tout in his 30s that we recently interviewed. Contrary to many others in his line of work, John is not obnoxious. He comes off as amiable and genuine. Also unusual is his command of the English language, which is unheard of among touts in this country. He was happy to shed some light on his profession and discuss why some bars have touts and others don’t.

So, you speak English?

Interesting. I’ve never met someone working outside a bar in China who can actually speak English.

In some bars, if you can speak English, it’s easy to get a job.

When did you begin working at this bar?

A friend of mine was working at a bar like this and he introduced me to the management.

Did you speak English at that time?

I did, but not very well.

Where did you learn the English that you now use on the job?

I started learning when I was 14. Now I practice with foreigners who are walking down the bar street. I’ll say “Hey, I have some English questions to ask you”. I have some foreign friends and I read English newspapers. I also take classes at New Oriental (the largest private language services provider in China).

Did you receive any training as a tout?

No, we just start work and then practice calling out to customers.

Have you trained any other touts?

No, my bar hasn’t hired any new touts in 7 years.

You know, some of our customers start drinking at Chinese restaurants and then they want to continue drinking at our bar. Some people are very bad. They drink a lot, say some dirty words. They might touch a girl’s tits if she was doing this job.

Why do some bars have touts and other bars don’t?

Bars that have touts are more expensive than bars that don’t. One beer at our bar is 40 RMB ($6.00) but in others bars the beer can be quite cheap. Those cheaper bars don’t need touts.

A: You should never tout to people who are on an adjacent bar’s territory. Very important.

What are foreigners looking for when they walk down your bar street? 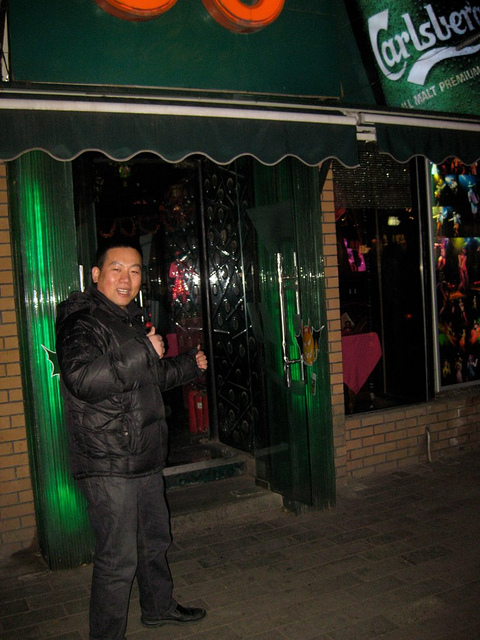 What is a “ladybar”? (note: some touts repeatedly ask male foreign tourists whether they wish to visit a “ladybar”. The meaning of this term is a mystery for the author and many expatriates, hence the question)

A place where you can talk to ladies.

Does a ladybar have any sort of prostitution connection?

No, it’s just a bar where you can talk to ladies. Those bars are even more expensive than the one I work for.

Can you tell different nationalities apart?

From their accents, yes. If I hear them talking while they’re walking down the street, I might say “Hey guy, you come from the US?” “No, I come from Canada”, ha ha. I think those accents are very close. But the difference between an American accent and a British accent is big.

A: Most customers act the same. If a bar has a lot of people in it, then they think that bar is good.

Who spends more money at your bar, Chinese people or foreigners?

Chinese customers. Some rich Chinese people spend money like they’re throwing it away. When these customers come, they order a lot of drinks and stay for a while. But foreigners might just order one beer or one shot and then leave, if they’re not happy. Some Chinese customers spend 1,000 RMB ($150) to 2,000 RMB ($300).

Then what’s the average bill for two foreigners who visit your bar?

How much money do you get paid each month?

Who are the biggest tippers?

What was your must successful touting experience? 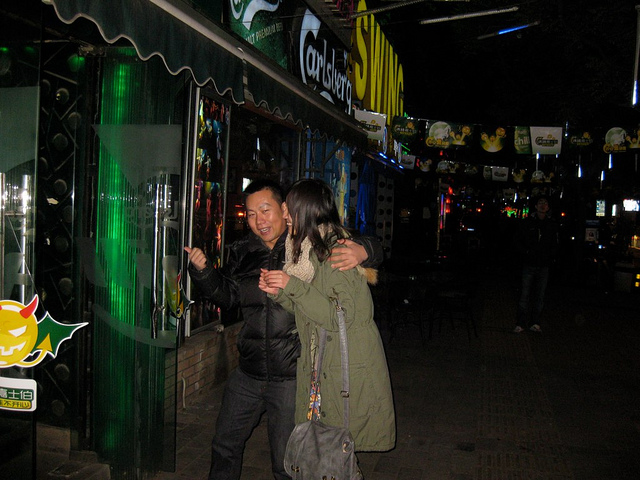 Before you were married, did you ever meet any girls from touting?

Oh yeah, it’s very easy to meet girls here. Some girls have argued with their boyfriends and then they come here. Then you talk to them and they complain about their boyfriend. Then later that night you call it a “one night stand”, right?

Did you ever date any girls you met while touting?

Have you ever been injured in a fight with a customer who was behaving badly?

I got into a fight with a customer once, which drew blood.

Did the police come?

I’d like to be the manager of a bar, so that I could act on my own opinions.

Have you ever met anyone famous while touting?

One time I saw this black American guy walking down the bar street. He looked a lot like Mike Tyson, so I asked him if he was Tyson. He said he was Mike Tyson’s older brother.

Who would you like to tout to most? Is there a celebrity, alive or dead, that you would want to get into your bar? 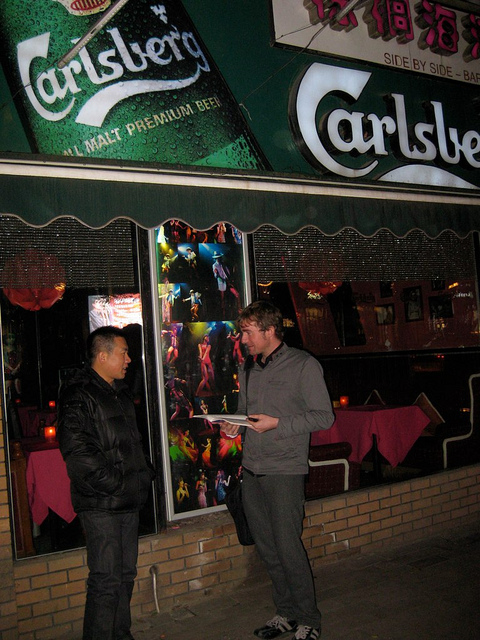 John being interviewed by the author