Su Yong 苏 勇 is a 32 year old chef from Chengdu, the capital of Sichuan province in China.  He has been featured on several television cooking shows, has 2,000 followers on Weibo (the Chinese Twitter) and recently opened a new Sichuan restaurant in Beijing. Sichuan cuisine is notable for its use of mouth numbing spices and is quite popular within China and abroad. Here are his thoughts on cooking, cuisine and Sichuan women.

When you were a child, what did you like to eat most?

Liang ban ji 凉拌鸡. It’s a cold dish, with boiled chicken and peppers in vinegar. I ate this frequently as a child. It was the first dish I ever prepared by myself – when I cooked it for my father, he said it was better than his own.

How did you become a chef?

Originally, I wanted to be a musician. After high school, I applied for a music training program in Yunnan province and was approved, but I discovered that the tuition was unaffordable. Then a friend of my sister’s got me a job at a restaurant in a hotel in my hometown. I loved cooking very much, so I decided to stick with it. My father was a cook and my mother cooks at home, so they influenced my decision as well. 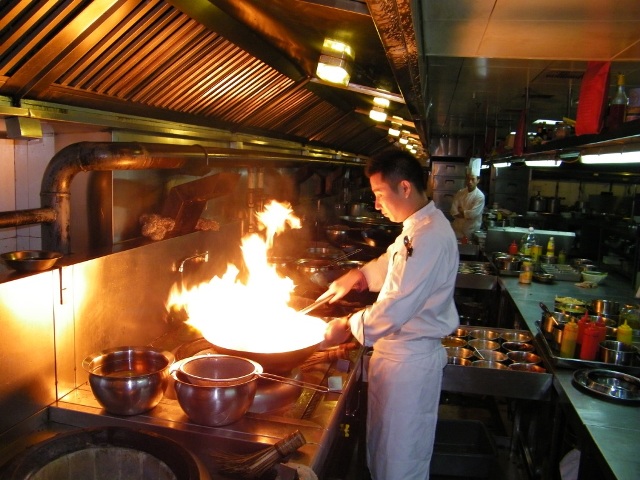 I read cookbooks, watched the other cooks and learned from them. Sometimes they would give me general cooking lessons. In order for them to be willing to teach me, I had to make personal connections and do favors, like helping them with their laundry.

I never gave up on music, though. I still take guitar and singing lessons. Knowing music is knowing life – it is romantic.

How many restaurants have you worked at?

What was it like to work at a steakhouse, after specializing in Sichuan cuisine for years?

It seemed magical, since I was introduced to many new cooking styles that I didn’t know of before. I learned how to prepare various steaks and salads, which I really enjoyed. I was trained by a Chinese chef there, who had been trained by foreign chefs. I used that experience to introduce some steaks and salads into the menu for my current restaurant.

Tell me about your current restaurant. What are you most proud of about it?

It is a Sichuan style restaurant that features three recommended Sichuan delicacies, hence the name San Yang Cai 三样菜. These dishes are dry-braised eels 干烧鳝鱼, loach with pickled mustard greens 口福胖泥鳅 and spiced frog stew 水煮美蛙. All ingredients are imported from Sichuan and I spent three months in Chengdu, picking authentic ingredients for the dishes. I developed the menu and personally trained the chefs.

What is the greatest strength of Sichuan cuisine?

Adaptability. Sichuan cuisine is famous for being spicy, but only about 40% of Sichuan dishes can be considered spicy. Its greatest strength is its great number of influences from other cuisines and overall flexibility.

What about Sichuan women? Is there a connection between their attractiveness and the local cuisine?

I’ll say this – if you travel to Sichuan as a married man, you may regret having been married so early. Every three steps, you will run into a beauty. Chengdu is a city no man wants to return home from.

As for the reasons behind this, I think the spicy local food improves blood circulation and the humid weather there induces sweating. This results in greater skin smoothness.

How can a chef best distinguish himself / herself?

A chef should have his own thoughts – independent thoughts. He should know how to independently develop dishes and not just imitate others. He should have a great passion for cooking. A chef doesn’t just promote dishes, he promotes the culture behind the dishes. A chef is a cultural promoter.

Where do you usually eat? Is there a local restaurant you are particularly impressed by?

I usually eat out, because it is a good way to do market research. I’ve eaten at almost every major or famous local Chinese restaurant. I think Da Dong Roast Duck Restaurant is very creative. They combine Western and Chinese cooking methods and the manager even has an MBA.

What is the most difficult dish for you to prepare?

Shi guo san jiao feng 石锅三角峰. It is a spicy fish casserole that includes many spices, peppers and wasabi that must be combined skillfully. Numerous cooking styles are used, which can be a challenge to bring together. In fact there is a documentary on the television channel CCTV 7, dedicated to this particular dish.

I really hate that. I would say “You should have a sense of social responsibility. If you use this oil, you aren’t qualified to be a cook”.

How do you feel about MSG?

I use MSG, though not in large amounts. I actually use sugar to substitute for large amounts of MSG. Sometimes, I see chefs on television cooking shows explaining how one can cook well without MSG, which I disagree with. I believe a small amount of MSG can improve flavor. There isn’t really a perfect substitute for it.

Which non Chinese cuisine do you enjoy most? Where would you go on a food vacation?

I really like some Southeast Asian cuisines, such as Thai or Malaysian food. Thai crab curry is a personal favorite, as well as black pepper steak. I would go to Malaysia, since I really like seafood and spicy dishes. Their cuisine uses a special pepper which I appreciate.

How do you feel when you walk by a KFC or McDonald’s in Beijing and see it completely full?

I actually eat at those places a couple times a month, when I need to save time. Personally, I like the chicken wings at KFC and I can eat about six of them in one sitting. Though those restaurants save time, the food there doesn’t have soul.

Andy Lau 刘德华. He’s a pop singer from Hong Kong. He actually ate here a few months ago after his performance at the Workers’ Stadium. He ordered dan dan mian 担担面, steamed pork and pea and vegetable soup. He had so many fans and reporters around him that I couldn’t talk to him, unfortunately.

How did you get 2,000 followers on Weibo (the Chinese version of Twitter)?

I post photos of celebrities who eat here, as well as discounts to my restaurant. I’ve been on some television cooking shows in the past as well.

To enjoy gourmet cuisine is to enjoy happiness. 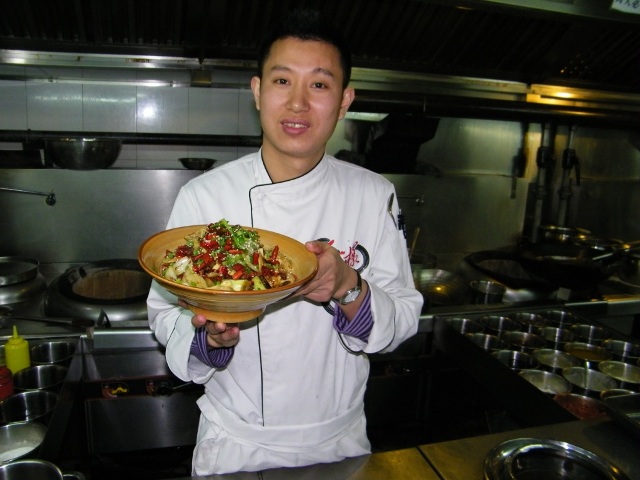 1 thought on “Step Into My Kitchen: A Talk With A Sichuan Chef”