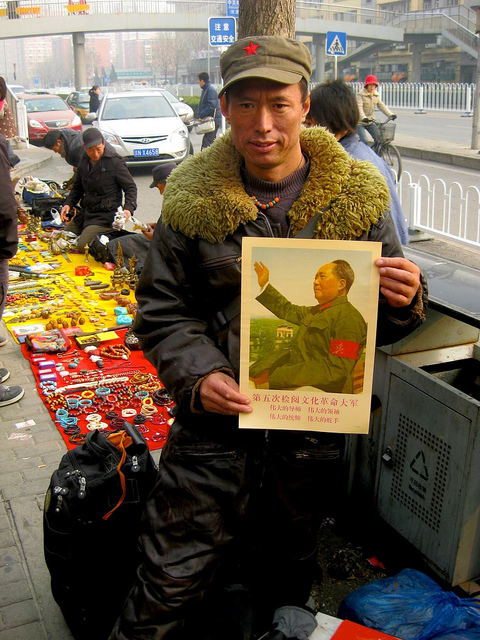 Zha Xi is a Tibetan migrant who moved to Beijing several years ago in search of better economic prospects. A Buddhist, he is part of a group of Tibetan migrants who sell Tibetan artifacts and Chinese propaganda posters in Beijing. The posters, which are copies of posters printed in the 1960s, proclaim various messages intended to glorify Mao Zedong, strengthen the Party’s position in society, and unite the common people.

These days, the posters are a popular item among the foreigners who pass by Zha Xi’s sidewalk sales operation in the heart of Wudaokou, Beijing’s university district. He usually earns about 1,000 RMB a month ($150), significantly more than he would have in his village. We spoke with him to gain some insight into his life and his views regarding his wares.

Where are you from?

A village in Sichuan province, on the border with Tibet. There are about 500 people in my village.

Can you describe your childhood and your life in your village?

My family is very poor. I am the youngest of five children. They are all farmers who grow a special kind of Tibetan wheat. They live in a two- story self-constructed home built of stone.

How much money does your family farm make per year?

How much schooling did you receive? Which languages can you speak? 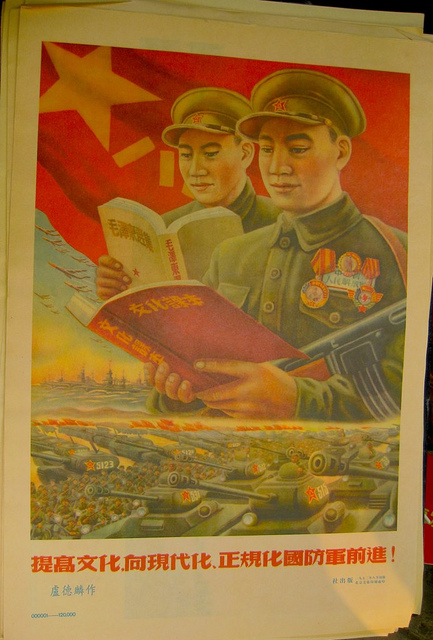 Improve the culture, march toward the modernization and standardization of the People’s Liberation Army

Why did you move to Beijing? How did you hear about this job?

For economic opportunities. Other people from my village have moved to Beijing to sell Tibetan artifacts.

Who makes these propaganda posters?

I don’t know. I get the posters by selling and brushing furs for Han Chinese (the dominant ethnic group in China). The Tibetan merchants have an exchange group with the Han merchants.

Who tends to buy these propaganda posters?

Foreigners buy the most. Tibetans buy some and Han Chinese buy the least. 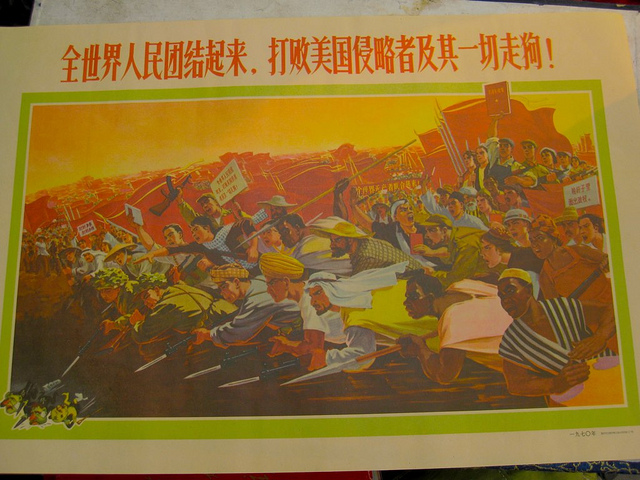 Unite the world’s people, down with American invaders and all other running dogs. The term “running dogs” refers to capitalists who follow the ways of United States

Because they want to know about the revolutionary path of Chairman Mao. 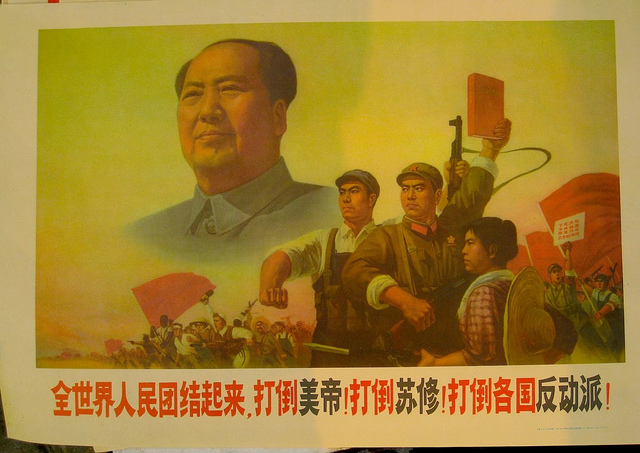 Unite the world’s people, down with American imperialism, down with Soviet hegemony, down with reactionaries

We like Chairman Mao. He is our idol. Chairman Mao is a divine person. Without Chairman Mao’s liberation of Tibet, we would have had no chance to travel to Beijing and see what this city is like. We are grateful for him.

Do you have a personal favorite among these posters? 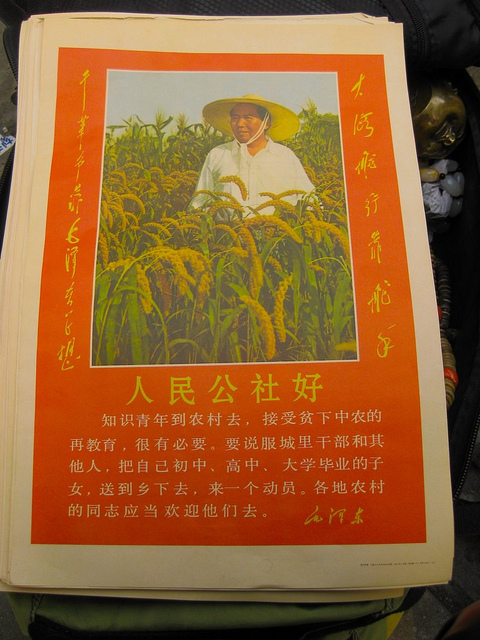 The People’s Commune is good

What does this poster depict?

I can’t read the writing, but it shows Chairman Mao personally teaching farmers how to grow their crops. It shows that he likes the poor citizens.

When Chairman Mao liberated Tibet, there was no violent action taken. Chairman Mao actually respected every single person and everyone is equal, no matter whether rich or poor. 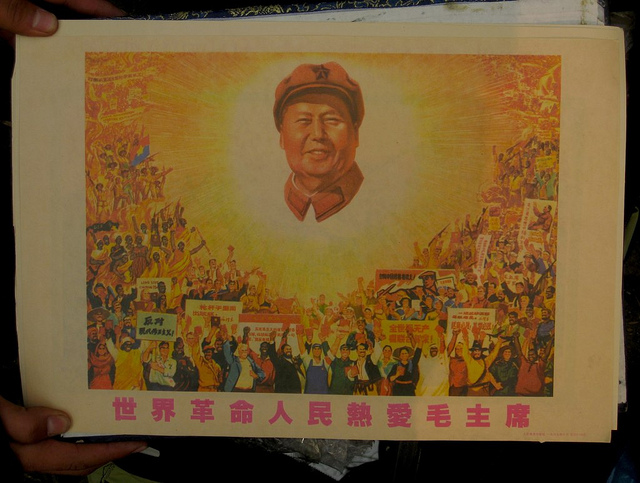 Are there any posters you sell that you disagree with?

What would Chairman Mao say if he were standing here today and saw you selling these propaganda posters to foreigners?

He would say “Very good job.” I think he would feel good about us since we are helping foreigners learn about how Chairman Mao liberated Tibet.

How exactly did Chairman Mao liberate Tibet? Who was Tibet liberated from? 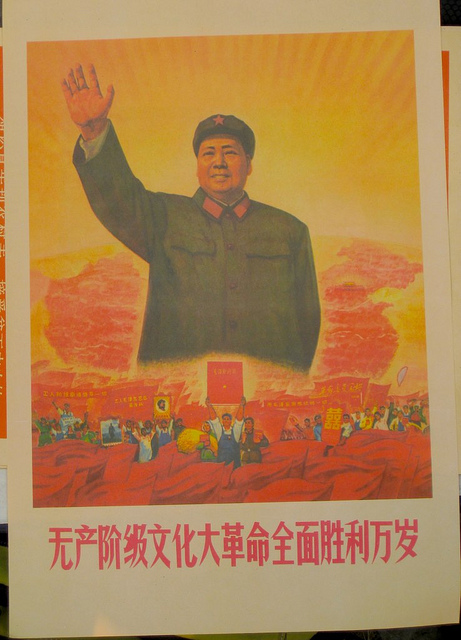 Would you sell propaganda posters featuring Hu Jintao (the current president of China)? 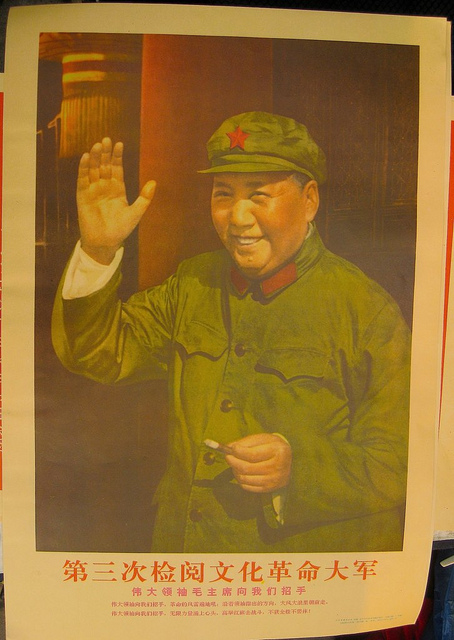